All for Joomla All for Webmasters

In geophysics earthquakes (from the Latin "terrae motus", than "movement of the earth"), also known as earthquakes or tremors (Latin Tellus, the Roman goddess of the Earth), are vibrations or sudden fluctuations, rapid and more or less powerful of Earth's crust caused by the sudden displacement of an underground rock mass .

Such a displacement is generated by the forces of tectonic nature which act constantly within the earth's crust causing the release of energy in an internal area of ​​the Earth said "hypocenter", typically located on the top of pre-existing fractures of the crust said faults. The fracture generates series of elastic waves known as "seismic waves" propagate in all directions from the hypocenter, giving rise to the phenomenon observed on the surface. The place of the earth's surface located on the vertical line of hypocenter is called the "epicenter" and is generally the most affected. The branch of Geophysics which studies these phenomena is seismology.

Almost all earthquakes that occur on Earth's surface are concentrated in particular places (near the border between two tectonic plates) where contact and consists of faults: these are indeed the tectonically active areas, ie where the plates are moving more or less slowly "rubbing" or "bumping" with respect to each other generating earthquakes of intraplate. More rarely earthquakes occur away from border areas between plates, for tectonic readjustments in volcanic areas, results of deep undergrund movement of magma masses.

According to the model of plate tectonics, the movement of the plates is slow, constant and imperceptible (except for some devices), but it distorts the rocks on the surface and underground. However, sometimes and somewhere, because of the internal forces (pressures, tensions and friction) between the rock masses, such distortions stop and the involved surface accumulate tension and energy for tens or hundreds of years until, on reaching of the breaking load, the stored energy is sufficient to overcome the resisting forces causing the sudden and abrupt displacement of the rock mass involved. This sudden movement (which in a few seconds releases stored energy to tens or hundreds of years) thus generates seismic waves and the associated earthquake.

There are three types of seismic waves: 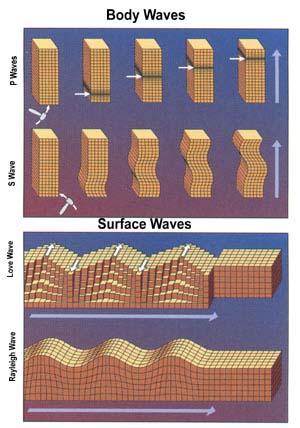 The longitudinal waves force the oscillating of rock's particles in the same direction of wave propagation. They generate so "compression" and subsequently "rarefaction" in the  material in which they propagate. The propagation speed depends on the elastic characteristics of the material and its density. In general, however, travel at a speed between 4-8 m/s. Since the P waves are propagated more quickly, they are also the first (P = Primaries) to reach the seismometers, and then to be recorded by seismographs. These seismic waves longitudinally through all the Tupi of matter: solid, liquid and gas.

S waves, or waves "secondary", propagate only in solids perpendicularly to their direction of propagation (shear waves). They are slower than P waves, traveling in the crust with a speed between 2-4 m / s. S waves can not spread through the fluids and gases because they do not resist shear. A difference of P-waves S-waves do not cause changes in volume.

Surface waves, unlike what one might think, do not manifest themselves in the epicenter, but only at a certain distance from this. These waves are the result of the combination of P-waves and S-waves, and are therefore very complex. Surface waves are the ones that cause the most damage. The waves of the Rayleigh Rayleighonde, also known as R-waves, move the particles according elliptical orbits in a vertical plane along the direction of propagation, as is the case for the waves in the water. Love waves, also called L waves, moving instead the particles transversely to the direction of propagation (such as S-waves), but only on the horizontal plane. All seismic waves are subject to attenuation and with the distance depending on the characteristics of the propagation medium. 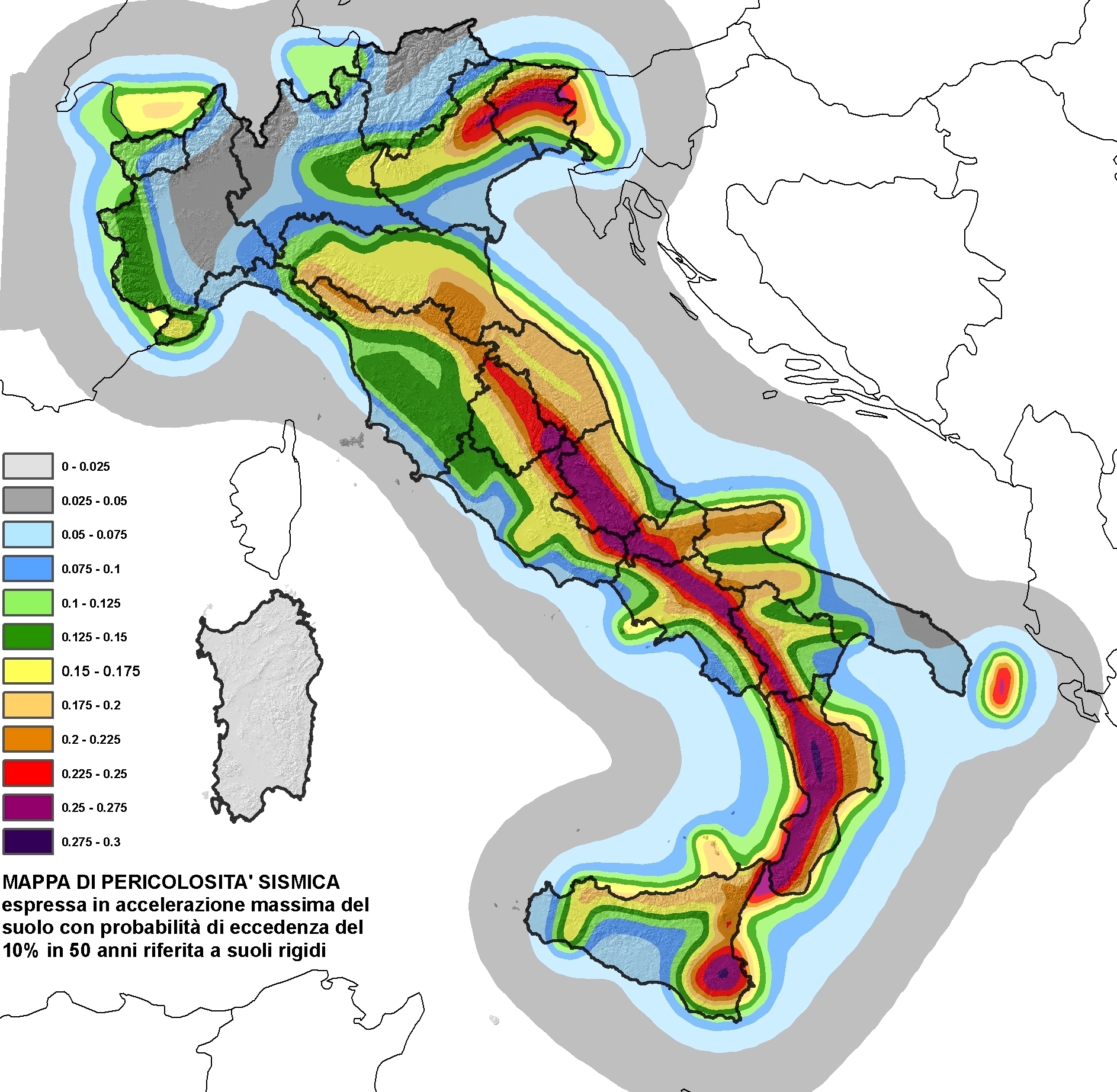 Italy is a seismic country

In the last thousand years, about 3,000 earthquakes have caused damage of varying severity. Almost 300 of these (with a magnitude greater than 5.5) have had destructive effects and even one every decade has had a catastrophic impact with an energy comparable to the earthquake of 2009. All the Italian towns can be damaged by earthquakes, But the strongest earthquakes are concentrated in some very specific areas: in the North-Eastern (Friuli Venezia Giulia and Veneto), in western Liguria, in the Northern Apennines (from Garfagnana to Rimini), and especially along the Central Apennines and South, in Calabria and Sicily. Although you live in a dangerous area, where in the past already occurred earthquakes or if the effects are felt. And this will happen again in the future.

What happens to a building?

An earthquake causes fluctuations, more or less strong, shaking buildings in various ways. The oscillations are more harmful than horizontal. The oldest buildings and those not designed to withstand the earthquake can not withstand such fluctuations, and therefore pose a danger to people. It is the collapse of the houses that kills, not the earthquake. Today, all new buildings must be constructed in compliance with the seismic regulations.

The next earthquake will damage?

It depends primarily on the strength of the earthquake (it occur thousands every year, most of modest energy) and the vulnerability of buildings. In the area you live in the past earthquakes they have caused damage to property and people. It is possible that the next major earthquake damage face: for this is important to find out, do prevention and be prepared for a possible earthquake.

When the next earthquake?

No one knows, because it could happen at any time. Earthquakes know many things, but it is not yet possible to predict with certainty when, with what force and precisely where will occur. We know, however, what they are the most dangerous areas and what can we expect from a shock: being prepared is the best way to prevent and reduce the consequences of an earthquake.

The effects of an earthquake are the same everywhere?

On an equal distance from the epicenter, the intensity of the shaking caused by the earthquake depends on the conditions of the territory, in particular the type of terrain and the shape of the landscape. Typically, the shaking is greater in areas where the soil is soft, less rigid on the land as a rock; also the location has effects on the intensity of the shaking, which is greater on the top of the reliefs and along the edges of embankments.

What does the state to help?

In 2009, after the earthquake in L'Aquila, the state has launched a national plan for the prevention of seismic, which provides for the allocation to the regions of around one billion Euros in seven years with different purposes:

In which area you live ?

Italy is a country full earthquake, but its territory is classified into zones with different hazards. Who builds or modifies the structure of the house is required to comply with seismic standards in your area, to protect the lives of those who live there. To learn about the seismic zone in which you live and what are the standards to be met, talk to the relevant departments in your region or your municipality.

Safe in your home

It is important to know when and how it was built your home, what type of soil, with what materials. And especially if it was subsequently amended in compliance with the seismic standards. If you have any doubt or want to know more, you can contact the technical department of your local authority or to a trusted technician.

(SOURCE "I DO NOT RISK" - Good Practice of Civil Protection - http://www.iononrischio.it)